You never know where a casual conversation will lead and thanks to Sue, Nikki and Mary at the Old Malthouse, the mystery of Bob's missing WW2 medals unravelled.

In 1939, aged 18, Albert (Bob) Walker joined the RAF's Bomber Command and served as a chef in the Mess, feeding RAF troops.  Bob has particularly strong memories of Peshawar (then NW India, now Pakistan) where life under canvas meant dealing with snakes, cooking in midday heat and sleeping in contrastingly cold nights.  Bob reached the rank of Sergeant and when de-mobbed returned to family life in Bognor, as his father set him to work in their Leather Handbag and Luggage shop under the Arcade.  With his wife, Joan, Bob raised their children and continued running his shop until early retirement.

Fast forward to this years 75th Anniversary of D-Day at the Old Malthouse, as memories and stories were shared, Bob (now 98 years old and in poor health) revealed he believed he'd never received his WW2 medals.  Without wasting time, with the Care Home Manager's full support, staff acted quickly on Bob's behalf to investigate further.  As Bob still knew his WW2 Service Number, the Ministry of Defence was contacted, Bob's story was relayed and his medals re-applied for.

Within weeks, to everyones delight, there was a special delivery for Bob, his War Medal 1939-45, Defence Medal and, as a survivor, HM Armed Forces Veterans Badge.  It was decided Bob deserved a surprise presentation and celebration, so a flurry of phone calls followed to local TV, radio, press and personal local contacts were approached to make it happen.

Selsey's Royal British Legion Steward, immediately agreed to host the event on the 9th July.  The RAF Association sent Bob a Squadron Tie, and gifted funds for a new outfit.  Cosyfeet generously donated a pair of shoes too.

Presenting the medals was Bognor's RAF Association President, who was accompanied by their Secretary and a Standard Bearer.  Local singers, happily gave their time to perform some of Bob's favourite songs, Glenn Miller and Big Band songs from the era and in uniform costume.

Grateful thanks goes to them all, and those that helped with the homes own party for resident and relatives.

Bob's finally, and proudly, in possession of his long awaited for medals and is enjoying the accompanying attention, interviews and outings - justly deserved after all these years. 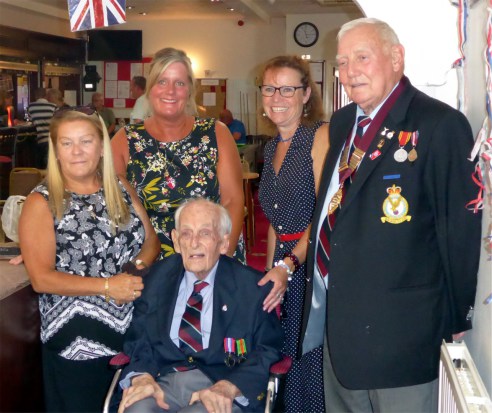 You can contact us by e-mail for further information about The Old Malthouse at the.old.malthouse@hotmail.co.uk

Please call us for further information about our care options:

This is where you can find out all you need to know about us.